Johann Rupert: Man on the Mission to save Artisanal Skills

Alobal convivial evening, good company and good wine inevitably lead to the loosening of tongues, the airing of strong opinions and the general setting to rights of the world. So it is easy to imagine the scene after dinner as Johann Rupert, controlling shareholder of luxury goods conglomerate Richemont, which includes Cartier, Van Cleef & Arpels and Panerai inter alia, sat chatting with designer Marc Newson. A shared love of great design and lasting quality led conversation to their favourite shop, G Lorenzi, on Milan’s Via Montenapoleone.

By Nick Foulkes. Published by the Financial Times on August 31, 2018

With the widest imaginable range of bladed objects, nail clippers and everything from cigar cutters to shoehorns, Lorenzi is a favourite shop of many a discerning man. Or rather, it was until early 2014, when it closed. “We both sat crying in our wine,” recalls Rupert. As well as tears, there were probably strong words and there might even have been vows to take a stand and “do something”.

Johann Rupert, controlling shareholder of Richemont and the force behind the Michelangelo Foundation, at his Mayfair office with (on left) Ran by Backhaus-Brown and Egeværk and (on right) Spiral by Matthew Chambers | Image: Richard Grassie

Resolutions taken after dinner tend to evaporate before breakfast. But Rupert prides himself on being a man of his word. First, he tracked down the next generation of Lorenzis to a workshop in Milan’s Navigli district. Then it occurred to him that there must be Lorenzis all around the world: specialist businesses and family‑owned ateliers, unique shops and extraordinary skills, handed from generation to generation, in danger of extinction. 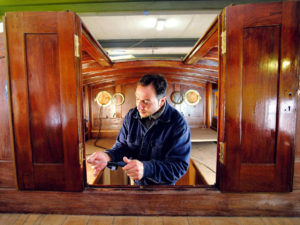 The boat will showcase the restoration work of the Francesco Del Carlo boatyard in Viareggio | Image: Officine Panerai

And so that post-prandial lament about the closure of Lorenzi has now taken shape as the Michelangelo Foundation, which holds its debut event at the Cini Foundation in Venice on September 14. Called Homo Faber, it describes itself as the “first major cultural exhibition dedicated to the very best in European craftsmanship”. For two weeks the island of San Giorgio Maggiore will be the location of a sort of Great Exhibition of handwrought objects, be they saddles for mules made by the last atelier in Greece capable of such work, or ceramic wood-burning stoves from Scandinavia. More than 400 craftspeople will be represented, with skills ranging from the familiar – for example, watchmaking – to rather more recondite areas of human expertise, including the polishing of crocodile skin. 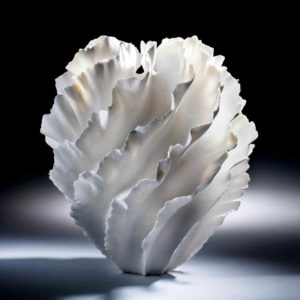 Rupert consented to a rare interview at his family home in London. At 3pm one extremely sunny July afternoon, I walk through an anonymous Belgravia gateway and into a low, rambling house built around little quadrangles and gardens, in one of which, seated at a table, is one of the kings of modern luxury. Shirtsleeves rolled up in the heat to reveal a discreet but complicated platinum Vacheron Constantin around a powerful, sinewy forearm, the “boss” (as one of his closest lieutenants refers to him) is on fine form, comfortably settled in a mood of benign informality. Any sense that he is the corporate incarnate has been left at the office. Family members come and go; a friend who came for lunch stays for tea. Over the next five hours, as the sun makes its searing journey across the sky, we talk about the history of luxury, its state today, how it became an industry and how it can have a human future. 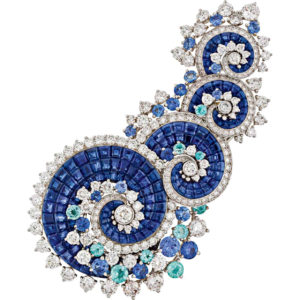 “What can Europe sell to the rest of the world?” he asks in his characteristically accented basso profundo. “Culture. History. Taste. The luxury goods industry started because of appreciation for finely crafted articles made by people with skills. But artisanal skill without the taste is wasted. We need a combination: true artisanal skills, helped and guided by people of culture and taste.” And this is the purpose of the Michelangelo Foundation.

Giulio Candussio creates intricate mosaics | Image: Giulio Candussio
“In the old days it took a while to make money, so you built up culture,” he explains. Now the speed at which fortunes are assembled can outstrip the development of the culture required to dispose of them elegantly. “Today I go to some of the most incredible artisans, and they’re appalled by what they’re asked to do. They have to do it to survive. But it goes against their culture.”

He cites his own past as having given him time to acquire appreciation. “We didn’t grow up, as Afrikaners living in South Africa, with what is commonly known as luxury now. I think I was 18 when my father could afford his first new car,” he recalls of life in a household where money was handled with care. His father Anton may have become a tobacco tycoon and prominent public figure in South Africa, but the family lived in the shadow of the Great Depression. “I’m part of a curious generation that heard about the Great Depression every lunchtime and every dinner,” he says. “My father wanted to become a doctor, but he didn’t have any money, so he couldn’t. He said, ‘I’m not going to work my whole life, build a business and then the Depression comes and I’m bankrupt.’ He studied which businesses did not go bankrupt and came up with the cigarette industry, because tobacco is cash. If your sales drop, you sell off your inventory, so your cash flow doesn’t dry up.” 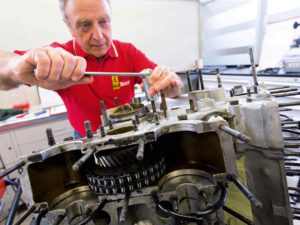 However, once the health risks of smoking became apparent, he gave his son strict instructions. “You will exit. My grandchildren will not be in cigarettes.” Rupert junior looked to see what else he could do. “I realised that luxury goods, if done properly and curated properly, commanded enormous brand loyalty.” He was reminded of cigarettes. “If you smoked Marlboro, you projected a certain image of yourself – ‘I’m the cowboy, I’m independent’. And I saw that in luxury goods.

“But my father thought luxury goods were frivolous.” He was not alone. Rupert tells how Gianni Agnelli was advised against buying Cartier by his mentor André Meyer, because it was “not a serious business” for an industrialist. “Every time I saw him after that, he asked, ‘How’s Cartier doing?’ I’d say, ‘Very well’. He’d say, ‘Bloody André Meyer’,” he chuckles throatily.

But beneath the roguish smile and the bluff anecdote, his decision owes something to his father’s fears. Where his father dreaded the return of economic Götterdämmerung, he fears the rise of technology. “Years ago, Ralph Lauren and I realised that we’re both slightly paranoid about things we don’t know and that are out of our control.” That is why he says he avoids investing in “intellectual property that can be digitised”, preferring watches and jewellery. “So long as there is love and passion, there will be luxury jewellery.” 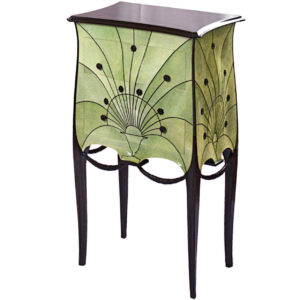 Ludovic Avenel crafts furniture such as this Empreinte cabinet at his studio in the heart of Paris | Image: Stephanie Compoint pour la Fondation Bettencourt Schueller

Concurrent with his observations about the speed at which new fortunes are made are his fears about the extinction of the middle class. “I don’t know where AI and machines are going to end up. But if we as humanity are going to preserve jobs and culture, we need to be smart.” He recognises that his success is “based upon people with culture and skills. And when their livelihoods are affected by machines, we’ve got to fight back.”

Rupert feels this fightback is particularly important as the chasm widens between the have-nots and have-yachts. Speaking of yachts, there will be one moored at Homo Faber – but this is no floating carpark with cinema room and tennis court; it is from the 1930s. Called Eilean, it belongs to Panerai and is there to showcase the restoration work of the Francesco Del Carlo boatyard in Viareggio. 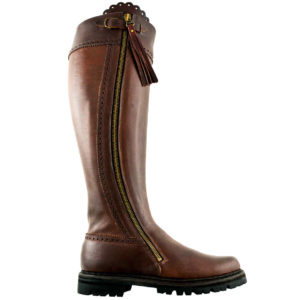 Indeed, the role of repair and restoration in a disposable world is stressed, with exhibits on the restoration of everything from art to automobiles, including the work of Autofficina Bonini, a firm that worked on one of Rupert’s vintage sports cars. “Cremonini Carrozzeria [not featured in the exhibition] renewed the paintwork – they had every single paint sample of every Ferrari made, so they could match the colour; while Bonini took the mechanics apart to the last screw. Nearly two years later, I got it back and the cost was less than the purchase of a new Ferrari.”
And yet had it not been for a well-informed car-collector friend, he would never have heard of Bonini. Similar is the bootmaker Artesanía Muñoz in the mountains more than 100km from Madrid, to which he was introduced by “a very famous Spaniard. They still use fax machines, but they make the best boots in the world.” Then there is Maglificio Miles, a fabric and knitwear maker outside Vicenza, whom Rupert had become aware of as a supplier to Azzedine Alaïa (in which Richemont owns an interest) and which he passed on to Thierry Despont to use in his work as decorator by appointment to the American plutocracy.

Until now this world has been the stuff of personal introductions and little black books, but he intends to change that. “We want the Michelangelo Foundation to be a platform for connecting people who have needs with people with true artisanal skills, design skills and taste skills. What I want to do is to have a métier d’art finder, like Watchfinder [recently bought by Richemont].” For those interested in commissioning artisans and designers from the exhibition, their contact details will be available on the website from September 14.

“Crudely put, Lorenzi on Via Montenapoleone shut because there were not enough people in Milan who knew it and could afford it. However, there are enough people in the world who love that quality. Somebody in Sydney or Buenos Aires or Shanghai can say, ‘I want that’. And with proper e-commerce, you can deliver it. So instead of thinking demographically, we’ve got to think psychographically. When people discover that quality, taste and style, suddenly they’re no longer reliant upon Montenapoleone, Bond Street, Condotti or Rodeo Drive.”

As he pauses to light a Van Rijn, a cigarette launched by his father that he jokes is probably only still in production because he smokes them, I put it to him that Richemont is in part responsible for the homogenisation of the shopping street and the commoditisation of luxury. His answer is cogent. “In every industry there is a certain amount of commoditisation that will allow you to afford total specialisation. We cannot afford to make truly special things, nobody really can, without cash flow. Forty years ago, Cartier was a handful of shops. And why could we buy the company?” He pauses for rhetorical effect. “Because it didn’t have products that were selling in sufficient quantities to pay the rent.”

Cartier’s success has enabled him to nurture such brands as Purdey and Azzedine Alaïa. “I never thought we’d make a ton of money with Azzedine. But my God, you’ve got to preserve something like that.” And he is at pains to stress that the Michelangelo Foundation and Homo Faber are not promotional vehicles for his brands. Hermès and Chanel’s Lesage atelier are also among the participants, but other luxury groups are missing. “There will be absenteeism,” he shrugs. “But it’s their loss.

“We aim to be a catalyst, because this thing cannot be just Richemont or just Chanel. In our business, I would like to think that intuition, style and taste can survive. But we’ll never know if we don’t help the people who still have the talents.” And, enlightened self-interest aside, he would like to express his gratitude. “I’ve made more money than I ever thought I would, and much more than I often think I deserve. Why not give something back to preserve this culture, to preserve the skills?”

FT How to Spend it Article