rank Pollaro, exotic wood whisperer, ultra-high-end furniture maker to everyone from Steinway & Sons to Larry Ellison, can point to the moment when his fledgling New Jersey company caught a rocket: It was the day in 1995 when New York architect Charles Gwathmey introduced him to music and movie mogul David Geffen.

“With Charlie and his clients it was never ‘Frank would like to bid on your dining table,’ ” Pollaro says of the late Gwathmey. “It was: ‘Meet Frank Pollaro, he’s going to build the table for your dining room.’ “
That seems to have suited Geffen, because shortly thereafter he began talking up Pollaro’s extraordinary Art Deco-influenced furniture to his rarefied circle of friends, a practice he continues to this day. “David has been like a father,” says Pollaro. “He has guided me and given me 20 to 30 clients you just couldn’t get to in any other way.”

Pollaro’s workshop is very much an artisan operation, taking on about 150 projects a year. But the customer list for his pieces, which can range from $25,000 for a club chair to upwards of $500,000 for a dining room table, packs big-league cachet. His clients include, by Pollaro’s estimate, about 30 members of The Forbes 400, notably Ellison (“my second turning point”), Jamie Dimon and Michael Dell, plus celebrities like Jerry Seinfeld, Robert De Niro and Alec Baldwin.

Not to mention Brad Pitt (“truly one of my best friends”), with whom he now collaborates on a line of furniture–Pitt-Pollaro (pitt-pollaro.com)–which features high-concept tables and beds and the rather sensational two-person “Toi et Moi” bathtub. 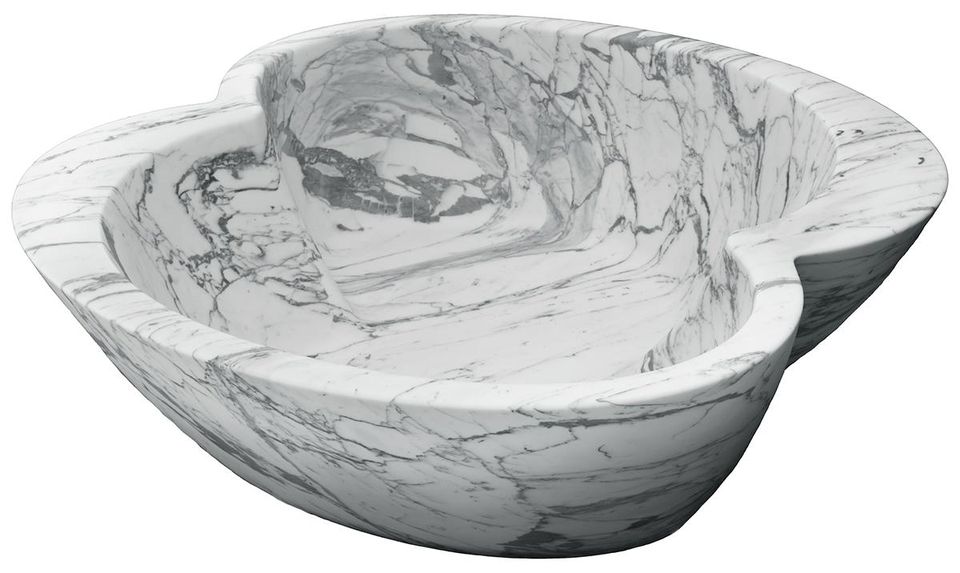 Pollaro’s good fortune is, literally, the residue of design. The son of a New Jersey demolition contractor, he was swept into the realm of creative imagination the moment he opened the door of his junior high shop-class wood room. “I couldn’t believe that wood came in those colors!” he remembers. “I saw the dark brown of walnut, the reddish brown of mahogany, the lighter red of cherry. I just couldn’t think about anything else.” He was 12 years old.
By high school Pollaro had taken a job with a cabinetmaker, and with the exception of a year at the Art Institute of Philadelphia (“It wasn’t holding my attention”) he never let up. At 21, eager to launch his own business, he had already put in the 10,000 hours the writer Malcolm Gladwell posits as the prerequisite for mastery of a field. 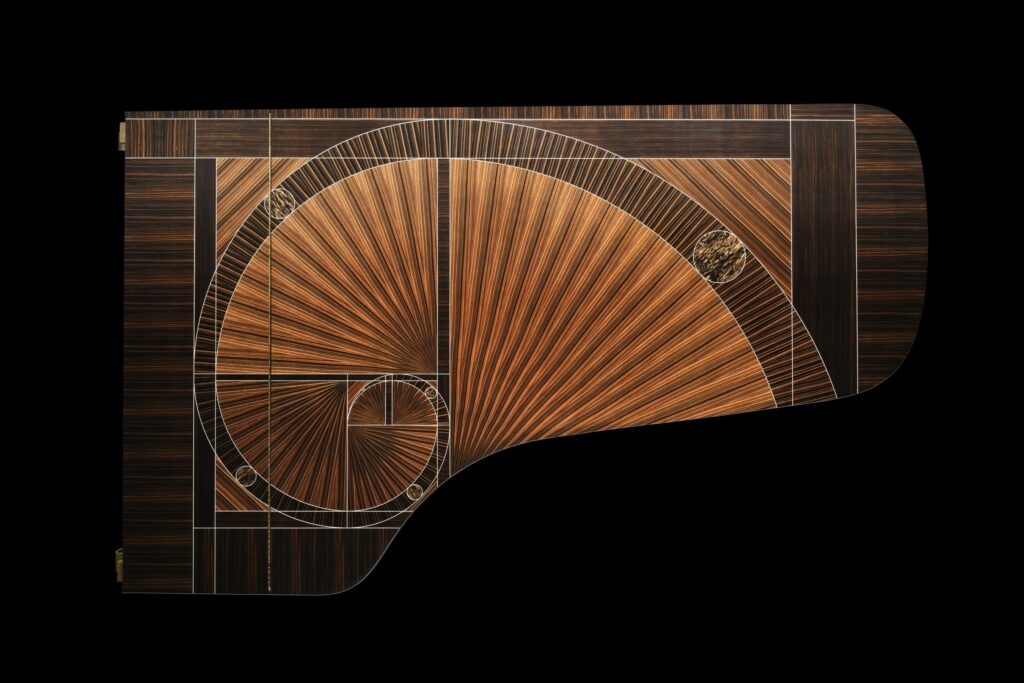 But it wasn’t just his dedication to design that set Pollaro apart. It was what he had dedicated himself to . By the time he had set up shop in 1988 in a 300-square-foot workspace he was already a pretty unusual guy for his blue-collar milieu. In the age of Bon Jovi he had become star-struck by mile-Jacques Ruhlmann, the exquisite 1920s Parisian high priest of Art Deco furnishings.

Exasperatingly exacting, Ruhlmann created magnificent, one-of-a-kind furniture whose labor costs and technical subtleties would seem to make them all but unreproducible today. Mr. Ruhlmann, meet Mr. Pollaro.
If you want, say, a Ruhlmann-designed writing desk that’s topped with shagreen–ray-skin–and requires 1,000 tiny ivory inlays to be individually inserted by delicate hand-chiseling, Frank Pollaro is your man.
But Pollaro’s obsession with Ruhlmann and other museum-certified mandarins is at the far end of what may be an even more foundational fixation: “I am,” he says, with the confessional solemnity of a man entering a 12-step program, “a wood hunter.”

Well, yes. Visiting Pollaro’s studio in a drab Union, N.J. office park, you step from his office into the veneer room, where a million square feet of wood veneer logs are stacked–including, he says, the world’s largest collection of Macassar ebony. (This spring a chair in one corner, upholstered in python skin and trimmed in 24-karat-gold gilt, awaited shipment to Angelina Jolie.) Out back are some 150 massive pieces of exotic slab wood. All told, he reckons, his wood inventory, which he values at $2 million, is unrivaled.

Having access to the kind of customers who will pay six figures for a 28-foot-long, single-slab table has put Pollaro Custom Furniture in an enviable position. And the 47-year-old furniture designer has turned out to be a tight manager. Though he declines to give figures, Pollaro says sales at his company, now with 28 employees, have grown by about 20% in each of the past five years. Pollaro carries no debt and owns, not leases, all its own heavy equipment.

He is also a persuasive salesman. An admiring comment by the shipyard owner who built Larry Ellison’s superyacht Musashi–entirely furnished with 94 pieces by Pollaro–convinced him that he might be onto a new line of business. “I am in London about four days a month these days,” Pollaro says, “banging on the doors of yacht designers. I see a large part of our business going there.”

The business with Pitt also occupies a lot of his time. The two have become close since Pollaro delivered a desk–a birthday present for Jolie–to the family chateau in the South of France six years ago and spotted a notebook of Pitt’s furniture sketches on a table. Those sketches became the basis of the Pitt-Pollaro furniture collaboration. 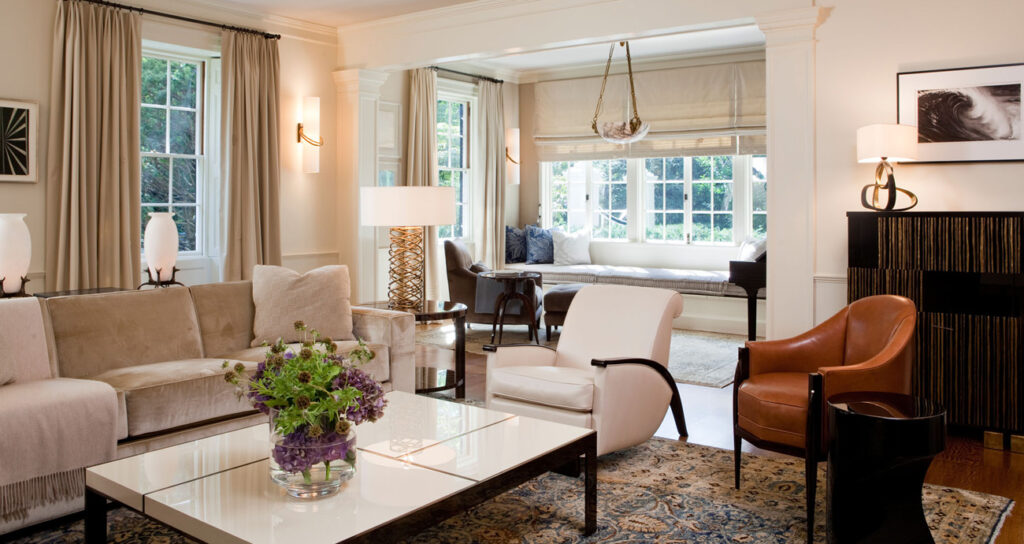 One early fruit of their labors is a jaw-dropping Long Run Table parked in Pollaro’s workshop. On top is an 18-foot-long, 5-foot-wide single slab of African Bubinga, so vividly figured it is almost kinetic–like an aerial photograph of a river delta in a flood. Underneath is Pitt’s surprise, a maze-like wooden base, all right angles and tavern-puzzle turns that form, somehow, a single line. “Frank is someone who is more obsessive than me about details,” claims Pitt, which is saying something: Pitt designed 30 prototypes before he was satisfied, a process that put Pollaro through some agita. “One of the things he does is make me crazy,” says Pollaro. “That table weighs 3,000 pounds and has no vertical support–there is no member that bears weight straight down from the tabletop to the floor. That is a serious physics issue. I sometimes send Brad e-mails, and I’m just cursing him: ‘Why? Why do you have to torture me?’ “
A two-beat pause; the beginning of a wry smile. “He loves that,” Pollaro says.